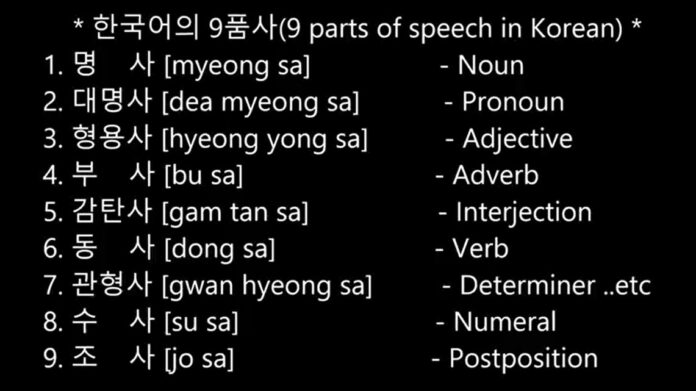 Noun
a noun is 명사. A word referring to the name of an object or place, event, abstract concept etc.

pronoun
a pronoun is 대명사. Pronouns is a word in place of nouns like you/he/she etc.

number
the number is 수사 Susa. A word indicating the quantity or order of things like 1 2 3, first, second, third.

adjectives
An adjective is 형용사. It is a word that describes the appearance or condition of an object.
be pretty
be beautiful

Determiner
A determiner is관형사. It is a word that makes up a substantive in front of (a noun, a pronoun, a number)
new car 새 자동차
the car

adverb
An adverb is 부사. It is a word that embellishes a predicate (verb, adjective). Very, really

post-position
post-position is 조사 in Korean. Words that express or adds meaning to the grammatical relation between the word and the other words, attached to the place of self-reliance morpheme, postposition, or end(ing) of a word.
은, 는, 이, 가, 을, 를

numbers수사,
determiners관형사
post-position 조사
These are Korean parts of speech that can be found in the Korean language only.

접속사 (conjunction)
전치사 (preposition)
These are Korean parts of speech that can be found in the English language only.